Have you lost your mind? Driving all this way just for a simple wedding?!
The wedding was taking place somewhere up in the mountain. We had some lines as an address and an approximate location! we were losing connection while getting close to dusty roads! All of it just for the sake of experiencing a culture that is going through extinction! We sounded weird to the locals but we were assured we’re going to have mind-blowing stories for people in the city!

Our Night Ride to the Wonderland

The driver was mumbling while trying to pass the roads. The road had gotten worse after the spring’s flood and heavy rains. There were many big rocks still on the road which made it so difficult to drive. We had to take a very long ride and it wasn’t all comfortable, sit back and relax kind of ride! Though I was too tired, I slept half of it even when my head was bumping up and down!
I can say that we didn’t get much of the scenery because it was late at night, but fortunately, we had other attractions to catch! When we passed by the petrochemistry industrial, which you can find many in the south of Iran and Khuzestan province, we truly stepped into a wonderland! The sky was dark and all the stars were easily visible due to the new moon but the ground, no! the torch burning from the natural gas has lightened the whole place! Like mild rays of sunset, the ground was bright and orange but above us, it was all dark! We felt like we were on a different planet. 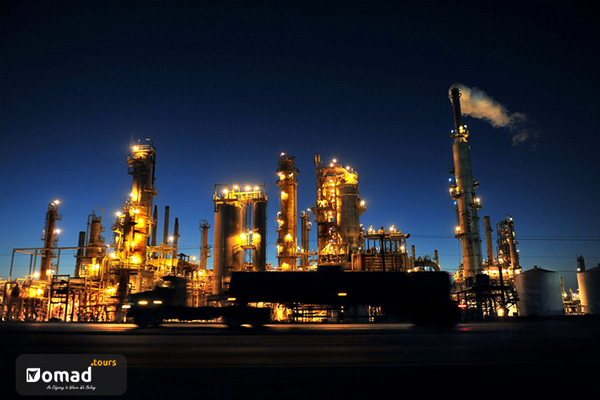 A petrochemical industrial area in Khuzestan

A Simple Structure as House

Nomads do the transhumance or migration (Kuch in Lori) two times a year. They move their herds from summer pastures to winter pastures and vice versa and it all takes 2 to 3 months. The rest of the year, they usually settle in the pasture, build a simple house and get themselves ready for the next Kuch! So their house should be close to the pasture providing fresh grass for their animals. Each family will occupy a considerable space which consists of a not so big living area; 1. A simple shelter to sleep is enough, and they don’t really need a door! They always have to keep an eye on the outside as they live in a vast area. 2. They need storage, for the animals’ food, woods for the winter and other essential stuff. 3. There is also a shelter for the animals, it can be an open air space while they are in summer pastures or again a simple masonry structure in their winter pastures so they are safe from rain and snow. Before starting the kuch, they pack up everything and abandon the place. Usually what is left is a platform and some simple stone walls but the fact is, each house has its owner so the family will come back to the same spot the next year. 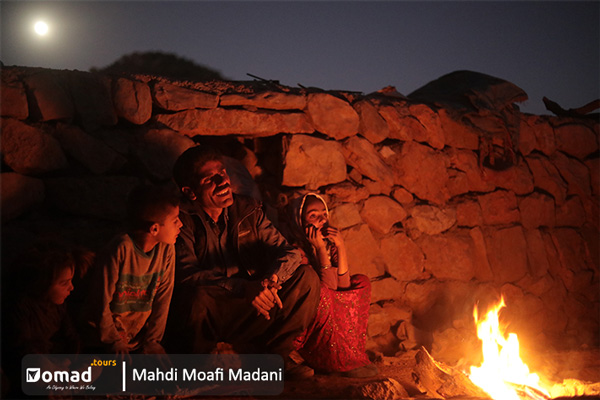 Nomads spend their nights around the fire, leaning against the stone wall in their simple shelter

It was a 4-hour drive to a village near Lali. We can’t really call that a village as it was more a community of nomads deciding to stay the winter in that specific area. There were scattered houses and as soon as we reached one, we knocked on their door, looking for our host! Unfortunately, we didn’t manage to find them at that very late hour, so Mohammad, the owner of the house suggested we stay the night and tomorrow morning, we go to the wedding with them as they were also invited!
It sounded like a decent plan so we accepted their invitation and stepped into the house, found somewhere to sleep immediately and went to bed! It took me a while to fall asleep because I was shocked by how it all happened so quickly. Not a long time ago I was at my cozy room with heating and now I’m in the middle of nowhere with no connection to the outer world, sleeping and shaking right in front of this silly open door that had no function at all but to let the cold weather in!

What is in There?! 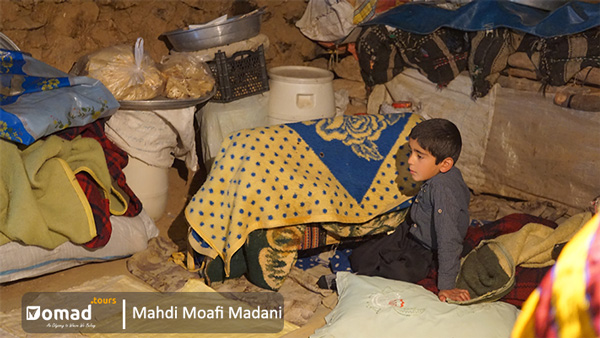 There is a baby underneath the blankets!

In the middle of the night I heard a cry. At first, when we came into the house, I didn’t really care about the blankets beside me, I didn’t think it might be something interesting. But when I heard the crying coming from it, I was surprised! The mother of the family had put a thick layer of a blanket on her child’s cradle! She said it’s freezing he might get a cold but one thing that I didn’t understand was there were no holes to breathe! I believe children of nomads turn out to be resistant even from their infantile! 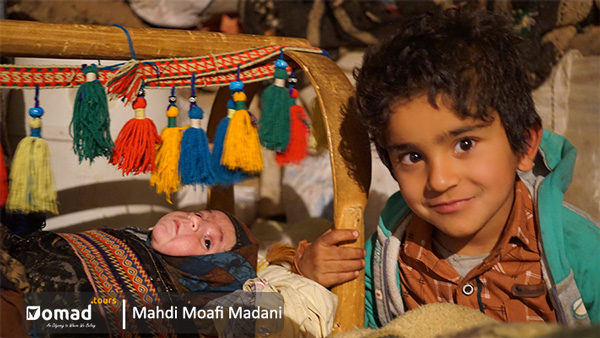 The next morning, the mother of the family made us breakfast, local butter and sesame paste which she bought from the city! I washed up and went outside to catch the first sunlight, and yes, it was that early to begin! While I was capturing the goofy little calf following their mothers around, we heard the wedding sounds coming from the distant! Nomads begin to celebrate from early morning and the ceremony lasts long. Yesterday we couldn’t get to the first party, in which the groom’s family came from the near village to the bride’s tent singing and celebrating. Today is the last party, after lunch, they are going to head Dezful city for a modern wedding! The new couple have decided to move to the city. Sima, the bride who is also the oldest daughter of Jamshid, was both excited and sad to leave for the city. Brides usually don’t get a happy look during the wedding, they miss their families and often have anxieties facing the new family. They won’t get a lot of chances to visit their parents as they have duties once they become a housewife.

An Epical Walk to the Wedding

As we arrived at the location, we saw many Bakhtiari men dressed up in Chogha (the special Bakhtiari woolen coat) and putting a special black hat on, getting close and walking toward to where the party is being held! 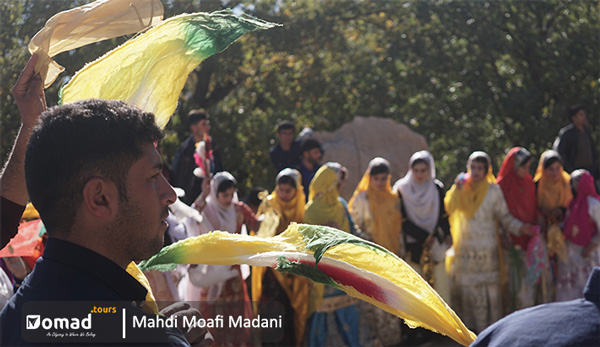 The first picture of my nomadic wedding came to life! Colorful Women were dancing in a row, moving handkerchief in the air and the musicians (Toshmal in Lori) who came from the city, were playing Dohol and Karna. 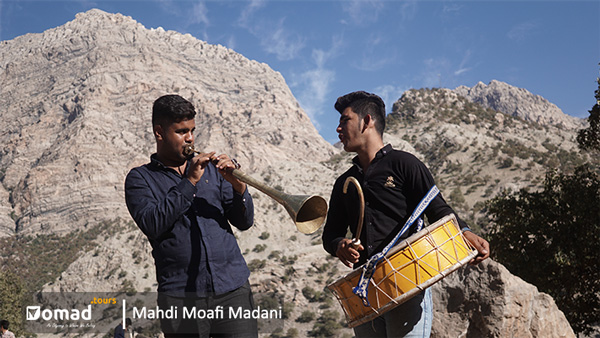 Other young men were standing in front of the women and also dancing in line. They all shaped a circle. But the older men, they felt too old to join the dance but couldn’t help watching them carefully from the tent above! 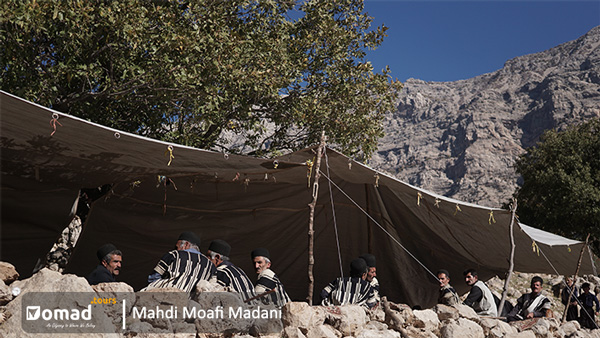 Men were seated separately from the women. They had formed a committee to decide the bride’s “Mahr” (An Islamic law, in the form of money or possessions paid by the groom, to the bride at the time of marriage) 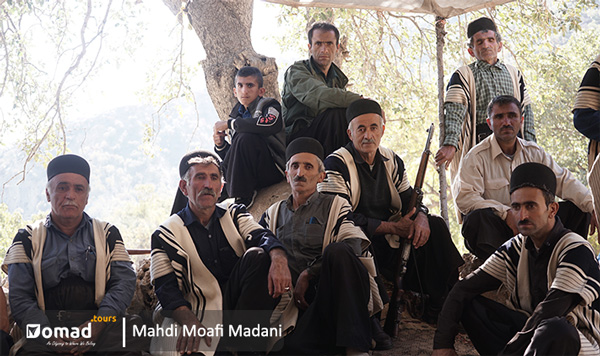 Men sit separately from the women and often dine earlier

One of the oldest women of the tribe showed me the tent of dowry! Bride’s mother had bought her a variety of kitchen supplies, blankets, and pillows and there were also some bags made of the rug they called Sheli, you could put clothes or sleeping sheets. 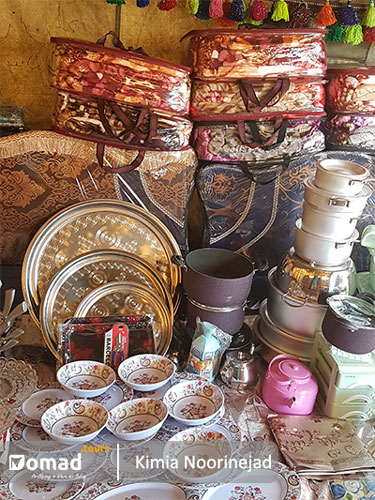 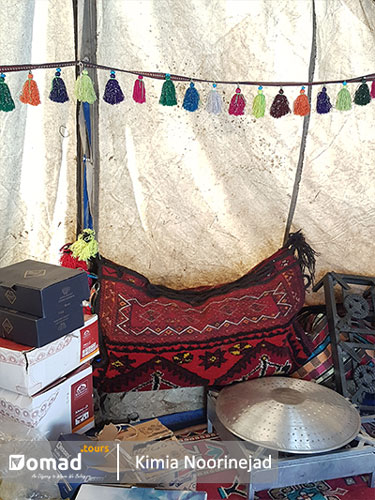 Everybody was excited to see the dowry so once in a while people came and pulled the tent’s curtain aside to see the bride’s gifts. Also before the clergyman came to register the marriage, men of the family all climbed up and gathered to watch what the parents have provided!

The ceremony lasted from 8 am to 1pm! After dancing for 4 hours, everybody started to feel hungry and rested in shades waiting for lunch! Compared to classic nomadic weddings, this one was luxurious! The families were wealthy so we had a great amount of food to eat! About 9 goats had been killed and then the chefs from the town made a stew with rice. 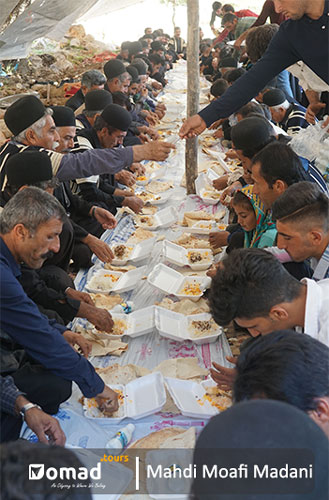 Other than the food, the filming crew had professional equipment too! Didn’t expected to see a drone in a nomadic wedding! 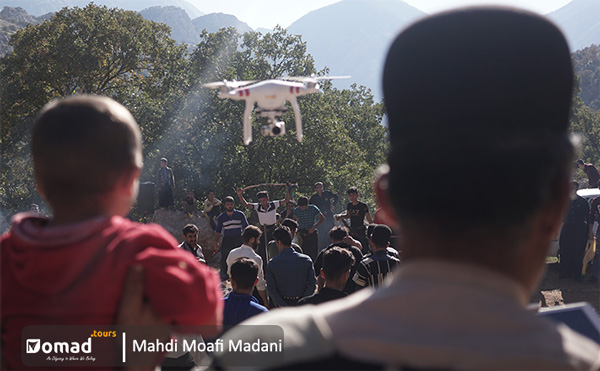 Preparation of the Bride

Meanwhile the bride was getting ready in her private tent! The stylists which were called from the city, were busy preparing the special bride! As there were no seats, she laid down, put her head on a pillow and waited for the make-up artists to do their job! She put out her nomadic outfit and wore the typical fluffy white matrimonial dress and high heels! Interesting she walked easily in those while climbing down the mountain. 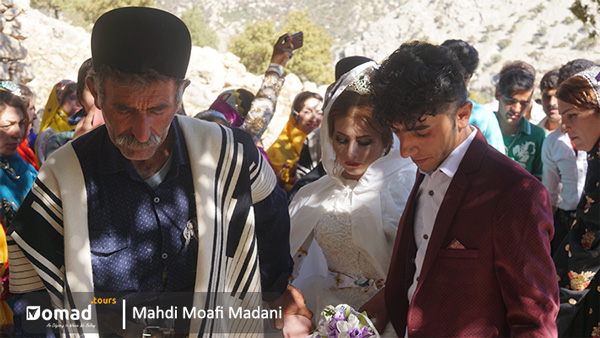 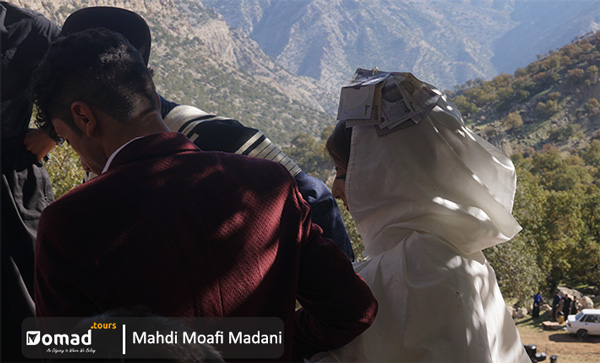 The marriage began! In Islamic matrimony, a clergyman has to say the words and ask the “I do” question for three-time as the bride refuses to answer each time! This is a cultural gesture to show women’s modesty. 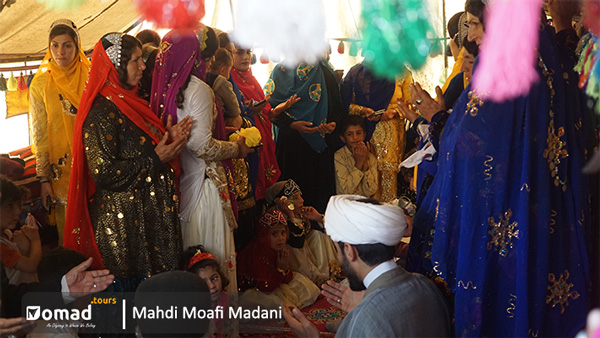 In the Islamic matrimony, the clergyman register the marriage.

When the registry got completed, bride and the groom said goodbye, cried in the embrace of their mother and got on a car decorated with colorful Shirdung Sima herself made. Shirdung is a string and a piece of colorful yarn representing joy and happiness.
We also packed up and looked for a ride to Dezful! We found an open seat on the back of a truck, watched the scenery joyfully in the light and not like the night before! 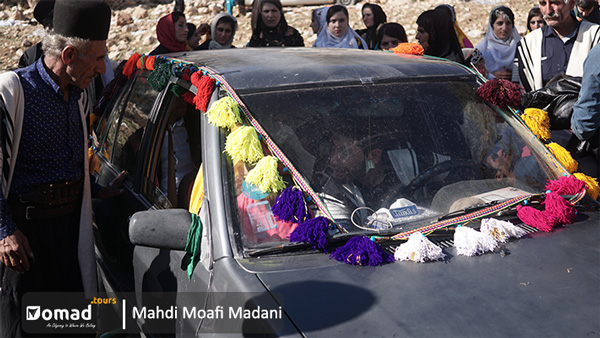