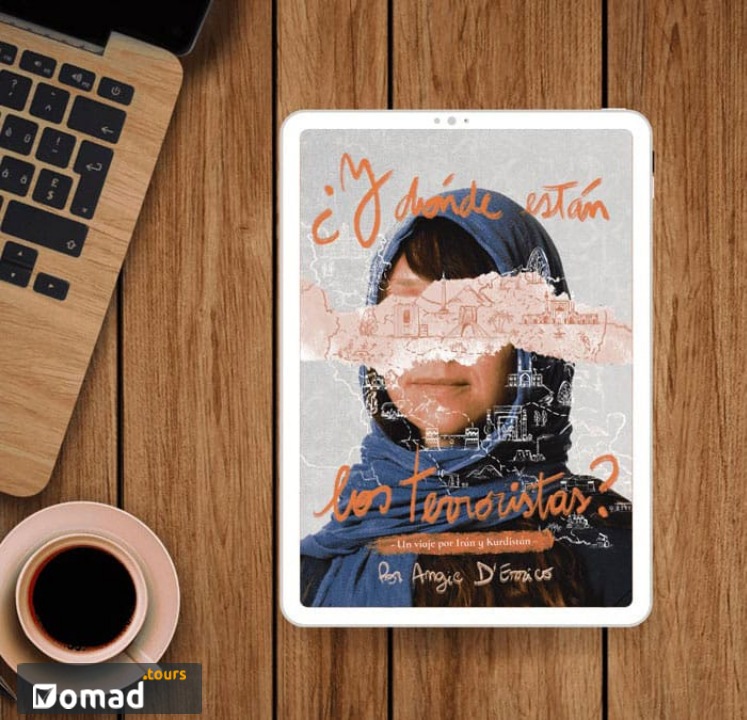 Dreaming of writing a book since childhood, Angie D’ Errico, Argentinian solo female traveller, podcaster and travel content creator, finally wrote her first book on her memories and experiences in Iran; ¿Y dónde están los terroristas?. Backpacking the world since 2012, Angie had a rich record of travelling the world before travelling to Iran; but her unique experiences, emotions, and changes she felt within herself during travelling to Iran (and especially Kurdistan), were triggering enough to motivate her to realize her lifelong dream: writing her own book.

The title of Angie’s book, “And where are the terrorists?” (In Spanish: ¿Y dónde están los terroristas?”) is itself a guide to its content. Brought up in the other side of the world, with quite a different culture, Angie knew almost nothing about Iran and the area of Kurdistan other than them being somehow associated with terrorism and war. When travelling to and living in the mysterious destination though, Angie saw no trace of what she had imagined before. Through spontaneous friendships, dinner meals on pretty carpets, prohibited, secret dances, calls to prayer (Azan), and an unbelievable amount of hospitality, Angie got to know the reality of Iran. Awestruck by the loveliness of the country, she saw everything but what she had prepared herself to see: terrorism, hence the title “¿Y dónde están los terroristas?” (And where are the terrorists?).

What was the Motive Behind Writing the Book?

In a live meeting on her Instagram, Angie elaborates on her book and how she was inspired to write it. “I don’t want to sound mystical or dramatic”, she said, “but within 10 days of staying in Iran, a voice inside of me told me: this [story] has to be told. It has to be known”. Observing what harmless, peaceful people Iranians were, welcoming her with open arms anywhere she went, offering her free food and drinks, and asking nothing in return, she was moved deeply; especially when she remembered in the midst of all these nice gestures, how Iran is misunderstood, neglected or even mistreated by the world. During her 62 days of staying in Iran in the year 2019, she was surrounded numerous times by Iranians who circled her when they realized that she was a tourist, just to humbly ask her to clear out the confusion and misconceptions about Iran when she returned to her country; to tell her family and friends, and the world too that Iranians are not hostile or aggressive; that they are a peaceful nation like any other. These encounters, constantly reminding her of all the injustice done to Iran and its image, broke Angie’s heart. She couldn’t stop thinking about how unfair it was that such a rich culture and warm, friendly, hospitable people were pictured very differently and reflected negatively in the mainstream media to shape people’s thoughts and feelings against Iran.

At first, Angie wanted to name her book: 62 days with Hijab” (In Spanish: 62 días con hijab), referring to her 62-day journey in Iran, wearing Hijab; but through some consultations and considerations, she changed it to “¿Y dónde están los terroristas?” (And where are the terrorists?) as she realized that many people might not be familiar with the word “Hijab” (which is a garment that many Muslim women wear to cover their heads). Her book has been changing many people’s ideas about Iran and Iranians since its publication and is starting to be a quite popular book in the travel literature genre in Latin America and the world.