Throughout history, nomadic life has faced numerous ups and downs. From internal struggles such as inter-family and inter-tribe challenges, to external risks and threats such as famine and forced settlement, nomads have seen it all and overcome each and every challenge resiliently. The recent Corona-Virus pandemic, asked yet another time for nomads’ well-known resilience and challenged their resistance.
Nomadic life, due to its pandemic-friendly characteristics, has been one of the least negatively affected lifestyles since the outbreak of the Covid-19 disease. Nomads live and move in vast plains and green pastures, far enough from the other nomadic families and hence being socially distanced and in no need of face masks by default of their lifestyle. They get the best of what every lung craves since the outbreak of the virus: pure oxygen. Living in the mountains and being in the heart of nature let the nomads breathe fresh air and drink fresh water. They have been among the last communities that Corona-Virus visited.

What Happened to the Nomads’ Kooch When Corona-Virus Arrived?

To prevent the contamination of nomads by the Corona-Virus and its transmission, Iran’s director of tribal affairs, had imposed restrictions, declaring that nomads must postpone their biannual transhumance (Kooch) for several weeks and their movement in urban areas was prohibited. The authorities even promised to supply them, if necessary, with grass and water.

However, the nomads did not seem to want to put off their departure, since the nomadic community was not contaminated yet and they would’ve lost the golden time of Kooch and the green pastures if they were to postpone their migration.

The imposed restrictions due to the Corona-Virus prevented even the rather “modern” nomads from transhumance by vehicle like the previous years, because the vehicles had to pass through the cities, which was prohibited in the pandemic; so inevitably, they all took the mountain trails and the history of nomadism witnessed and open-armedly welcomed the return of nomads to the Kooch on foot.

During the Kooch season, in the midst of a deadly pandemic, dozens of families were gathered at the sides of the mountains to practice their ancestral tradition, Kooch. To avoid saturation of the pastures, several groups of nomads had left even ahead of schedule! It was a glorious gathering, and mother earth was beautifully reunited with her sons and daughters again.
Economically speaking, nomads have been doing quite well despite the economy-paralyzing appearance of the Corona Virus. Their products (milk, cheese, yogurt, honey, wool, etc) are basic, primary products and nutritions that many families and factories need in order to keep up their life and business, so there hasn’t been much stagnation in the nomadic economy in this area. 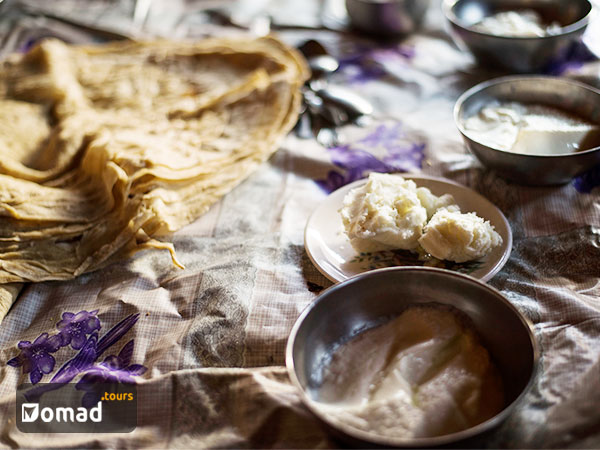 But nomads’ secondary income, which is achieved through selling their handicrafts and hand-picked products, has had a small decline. Handicrafts, however beautiful and precious, are not an absolute necessity for families, so many of them have been giving up buying handicrafts since the Corona-Virus outbreak. That’s where we, (IRANomad Market team), have stepped in:

During the pandemic, we branched out to include a marketing space for nomads’ products and handicrafts and diversify their income sources. In IRANomad Market, we reach out to the possible customers and facilitate the trade between them and the nomads. In this way, we save nomads’ secondary income and guard their authentic art and heritage at the same time.