I had a dream over the last two years to see Maymand again. Those hand-made caves and walks amid the rubble of the ancient Maymand village seemed to call to me, like some sort of unattainable siren…. Two years ago, I embarked on a trip without knowing where I was going. I just knew I was going to the south east of Iran; Kerman province, but I had no idea it would be the trip of a lifetime. Thirty minutes to my destination, there was a vast area of wild pistachio called ‘Baneh’. I feasted my eyes on the scenery not knowing that there was something even more awe-inspiring ahead of me…. I was going to meet a few remaining cave-dwellers still living in the UNESCO World Heritage Site of Maymand. I would live a semi-nomadic life in the man-made caves in the village of troglodyte Maymand. I was going back in time … 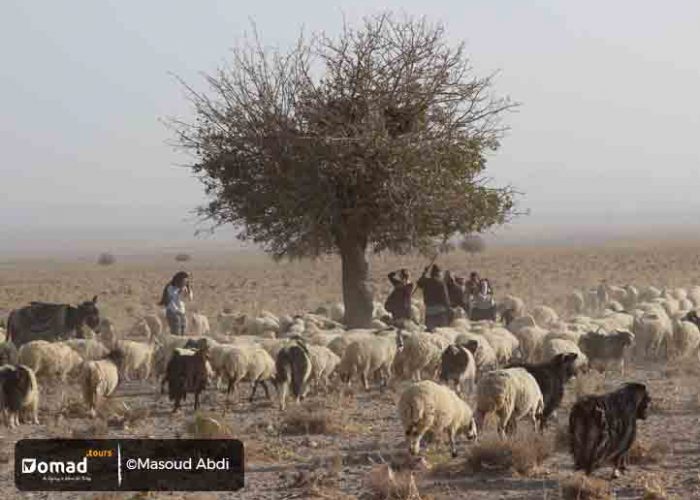 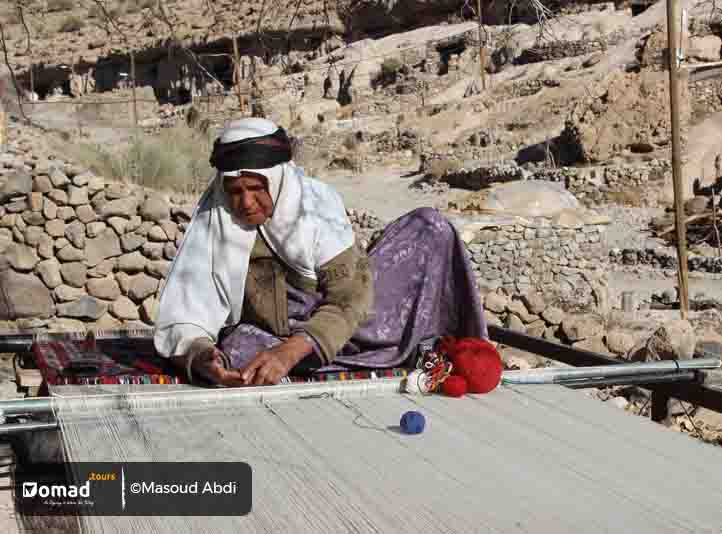 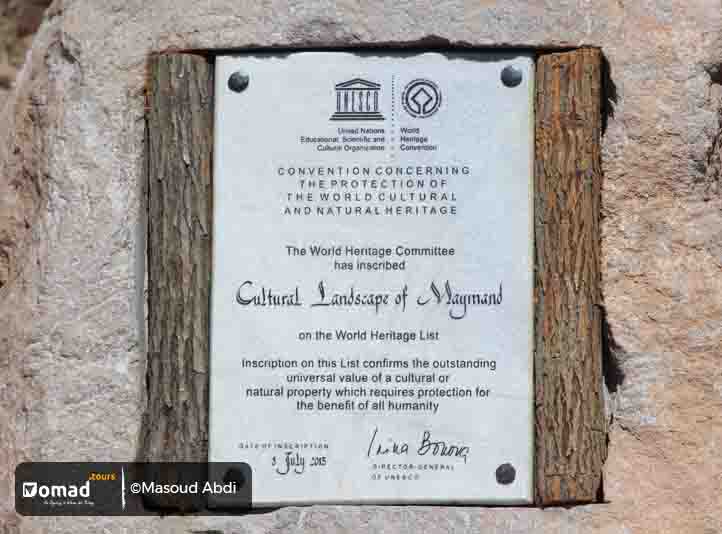 The Day I Visited the Man-Made Troglodyte Village in Iran

We arrived there around the evening. I’d never forget my feeling when I first saw the hand-made caves. I couldn’t believe my eyes. The fact that I didn’t know what I was going to see, made me even more stunned & infatuated. I was asking questions about everything; how is it possible that these caves are man-made? How is it possible there are still some people living in caves? We moved toward one of the caves. They are called ‘kiches’. We passed a narrow passage and there it was, a sophisticated antique wooden door. Inside the kiche were two rooms and they were really unusual, exotically gorgeous. The whole time I was there, I was thinking of the people who used to be living in this cave hundreds of years ago. I stayed there & slept the night in the very same cave and it was my best sleep ever! Its genuine darkness & the slight chill in the air were all I wanted for my sleep. 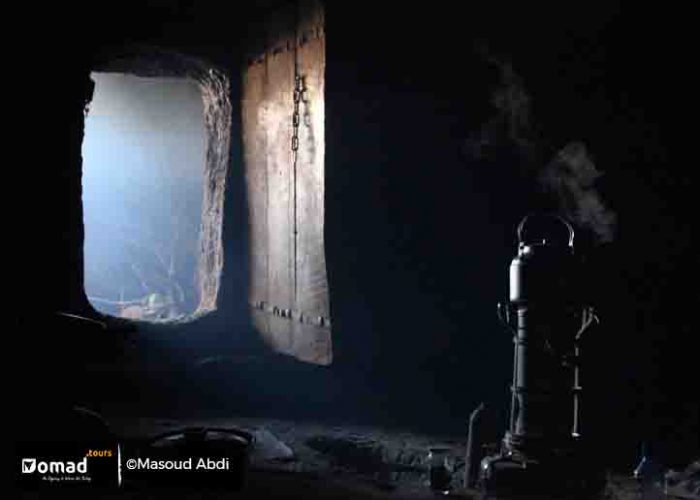 The next morning, it was the sounds of the wolves that woke me up. I rushed out of the bed & left the cave to capture my second thrilling experience of the Maymand village. It was at the crack of dawn that a pack of wolves gathered all around the mountains above the caves growling & whimpering. I saw none, but I could easily hear them and this was how I began my day with lots of excitement.

The rest of the day, I was wandering in the Maymand village & devouring what I was seeing in each cave and the surrounding areas. I saw how someone had buried her or his loved one in their cave, I saw how someone was trying to go further making his cave bigger, but maybe he didn’t find enough time when his death arrived. I had read some mysterious novels, but the caves I was visiting that day were the most exotic things I’ve ever seen. I also had the chance to spend some time with two old women still living in the Maymand village. Nane Salma (grandma Salma) made us one of the most delicious Maymandi local food, and told us some interesting memories of the years she’s been living in the Maymand village. It was Ashura, and the woman was sitting in front of her cave mourning Imam Hossein’s death in Karbala. I sat beside her, touching her old hands, listening to her mourning. She was telling the story of Karbala and weeping for her Imam. “they didn’t give Him & His family water” and she burst into tears; Maymandies are quite familiar with this notion. Water has always been scarce there.

Where is the UNESCO World Heritage Site of Maymand?

Located in the Western part of Kerman province in south-eastern Iran, Maymand village is just 38km away from Shahr Babak, and the whole village is about 420 square km. The area is on the Southern slopes within the chain of Iran’s central mountains. Due to the altitude difference in the area, there are diverse climate conditions which make it possible for the people of the village to experience different seasons.

The Historical Background of Maymand

The age of the Maymand village goes back to the Parthian and early Sasanian periods, ca. 3rd century BC to AD 3rd century. What is now a UNESCO-registered village, once was home to hundreds of nomads in 7 or 8 BC.
According to locals, their ancestors carved out the cave homes with a hard, sharpened stone called ‘Kamar’ that is abundant in the area. Some of the homes are believed to have been continually inhabited by families since their creation thousands of years earlier.
When you are in Maymand, listen to the locals – Maymandians still use words from the ancient Sassanid and Pahlavi languages. Their dialect has barely changed due to the remoteness of the village.

What is Unique about Maymand?

1.
The most noticeable feature of the Maymand village is the special nomadic movement of its people. In the winter months, the Maymandians who are semi-nomadic agro-pastoralists, live in their cave dwellings lower in the valley.
2.
The area is a popular destination for those who’d like to experience how life has been back then in history. The houses in this ancient village are carved like caverns inside the mountain. The internal spaces have corridors, alleys, and pillars featuring rural architecture. The houses are situated in 4 or 5 stories, one on top of the other. There are 400 ‘Kiches’ or houses and each of them has between 1 and 7 rooms.
3.
The pristine, unspoiled village of Maymand is an example of a cultural landscape where a unique interaction has been made between man and nature. For centuries, men have been living in harmony with nature, and nothing has changed the serenity of the Maymand village. They all know how to make use of natural resources without causing damage to their environment. Water has always been scarce and they know how to collect their needed water from a variety of sources such as rivers, springs and subterranean pools, and qanats.
4.
The village of troglodyte Maymand is on the UNESCO World Heritage list as an exemplary system of manmade cave dwellings locals used to cope with the region’s harsh climate. It has been registered in 2001.
5.
No one knows who were the first people who made such hand-made caves, although there are two hypotheses about it.
6.
Another notable feature is the ruins of the ancient cemetery in the village.
7.
The Maymandians used to have four settlements. Three temporary ones and one permanent in the troglodytic houses for the winter months. Nowadays, they have three settlements. They also practice a three-phase regional variation of transhumance that reflects the dry desert environment. So, at the time of migration, they move with their animals to their defined settlements.1. Sar-e-Āghol are used from the end of winter until late spring.2. Sar-e-Bāgh houses are used during summer and early autumn. They are near seasonal rivers.3. The winter troglodytic houses; around 400 Kiches or houses which are carved out of the soft rock.

Each year, on the 10th day of Muharram, the day of Ashura, the day of Imam Hossein’s martyrdom at Karbala, people of Maymand, whether they are still living there or not, get together in the Maymand village to commemorate & mourn the martyrdom of Imam Hossein, and they do it in a unique way. The ceremony is called ‘Joosh’ in which early in the morning, all Maymandies who once passed their childhood in Maymand start walking toward the village. Around noon they arrive and then circle around and perform the ceremonies. Then, in the evening, those who live in the village go back to their caves, and those who have migrated to surrounding cities leave the Maymand village. 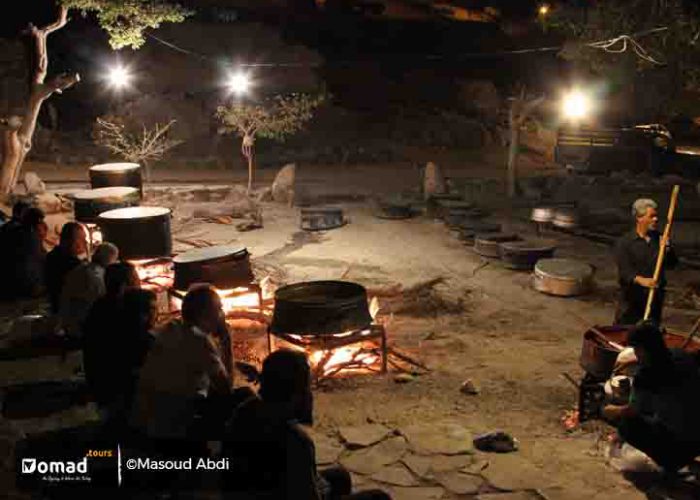 Where & When Can I Go to This Man-Made Troglodyte Village?

In the heart of the mountains, among the authentic man-made caves, there’s MaymandMoon Ecolodge where you can have a tranquil experience unlike anything you’ve experienced so far. Masoud & Pejman are there to make one of our best memories come true. Sandwiched between a desert and a mountain, Maymand has cold winters and hot summers, which, you can imagine, is a difficult combination. The best time to go to the Maymand village is spring, fall & winter. 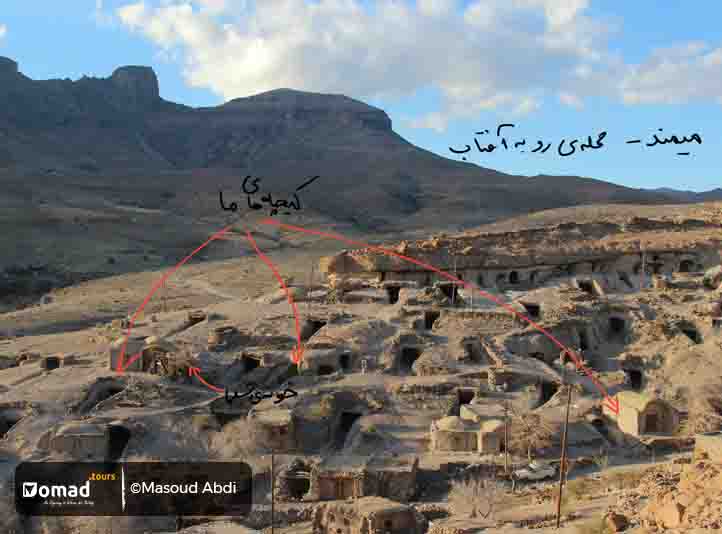 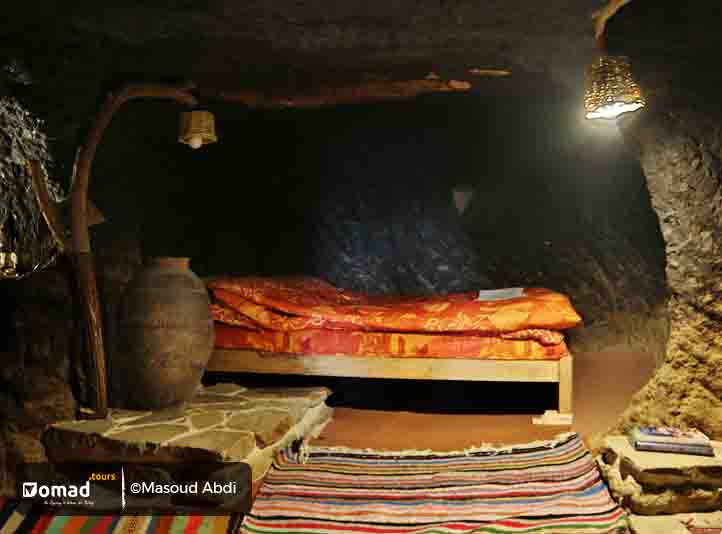