A Comparison between a Nomadic Life & a Daily Routine in a City
What does a day in a nomad’s life look like? Why do the nomads continue on living the way they do? What are some of the advantages of this lifestyle?
These are some of the questions that our travellers ask us often, and we have gathered all the answers to these questions in this following article, where we witness how a day in a nomadic life goes by versus a day in the bustling urban life. Through our two characters’ point of views, you will somehow find the answers to your questions.

6:30 am: in a nomadic life
Setareh wakes up while the mountains surrounding her are still shrouded in the twilight mist. The air is still a bit chilly and the sheep and goats are slowly stirring awake and the sound of their bells and bleats breaks the silence of the sleepy pastures. Without wasting time, she quickly starts to gather wood in the hill above. She starts to build a fire and bring the water to a boil in its soot-covered kettle and meanwhile she wakes her older son to take the herd to graze. Her eldest son, Farshad, gets up quickly and starts to separate the grown lambs from their mothers. After having a cup of steaming chai with a sugar cube, he sets off with the herd towards the hills as the first rays of sun slowly break the twilight. Soon, Farshad and his herd turn to little dots and vanish from sight in the crook of the mountains.
6:50: in a nomadic life
The eldest daughter of the family, Arqavan, wakes up and takes the teenage lambs to graze in a nearby pasture. Setareh starts making butter from yogurt, by vigorously shaking the yogurt in a goat-skin container called Mashk. The sun is up but the air is still cool and enjoyable. 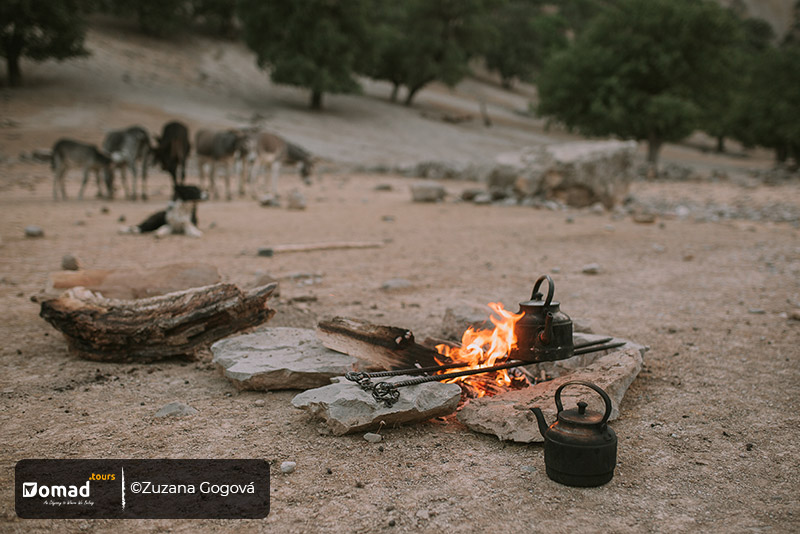 Sara wakes up by the unwelcome sound of her alarm going off in her home in Tehran. She turns on the stove to boil water and make a morning coffee for herself. But there isn’t much time for having breakfast and She quickly starts to get dressed and leaves the home at 7 am. Even this soon in the morning, the streets are bustling with people and the streets are alive with the steady rhythm of traffic. Sara takes a cab to reach her subway station. After 10 minutes in the cab, she reaches the subway station and squeezes her way into the tumultuous wave of morning commuters in Tehran. As usual, vendors press their way forward even in the super crowded subway stations and obnoxiously shout their prices and pitch their products, trying to sell anything from socks to makeup and headphones and snacks. Sara tries to mentally shut down the noise and focuses instead on her audiobook/podcast as she plugs in her headphones. It’s going to be a long 45 minutes of enduring too many loud people in too small quarters. When the time comes to change lanes and hop into another train, she does it without registering her actions. She’s well used to her morning route by now. The worst part of using the subway is getting off at the most crowded stop and trying to wound her way outside. At the first sign of fresh air and natural light, she sighs in relief, knowing the hardest part is done. And now, she just has to navigate her way through the passing cars and people and walk the rest of the way to her workplace.

8 am: in a nomadic life
Setare is still mostly occupied with making butter from yogurt. In the spring and summer, when the grass is abundant and the livestock feast on it day and night, the work is nonstop. There is so much milk to process into other products before it goes bad (and it can go bad rather quickly). Setareh has to milk the sheep every day and also keep count on how big the lambs are and whether they’re big enough to be separated from their mothers so that they don’t consume most of her milk. After she had sent her eldest son and daughter off to graze, her other children slowly had gotten up and now the smallest ones played around her while she did her work. Her other son, Mehran, was getting ready to go to a village to help his father on the way home from running an errand in the city. Mehran had to take a couple of donkeys with him to load all the stuff on, and he had a long way to go to reach his father and be back. Setareh started to pour yogurt inside an empty plastic bottle that used to belong to a coca-cola and set her son on the road with the yogurt and 2 loaves of bread as sustenance.

8 am: in Tehran
Sara buys a small pastry from a shop before entering her office. Once there, she starts to get to her heap of work. First, she starts by sending emails to several clients. After that, she starts on her main assignment, which is writing about the nomads of Iran and their heritage. 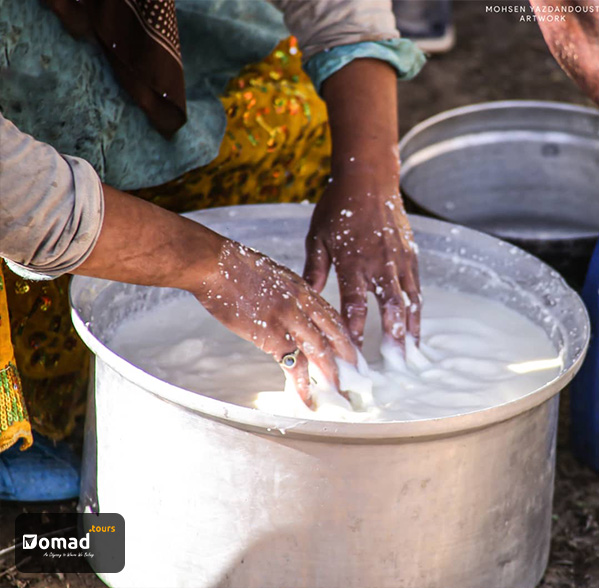 9 am: in a nomadic life
Setareh grabs the biggest container that they have and heads off to bring water from the stream which is about 30 minutes away from where they have set up their tent. She thinks back to that time when they had a few guests from the city visiting them, and when the guests had offered to help they had been unsuccessful to even reach the stream in their first try. The next time, they managed to find the stream but the full container was too heavy for them to carry so they had ended up bringing back a half-empty container. She smiled at the memory. While she continued the way to the stream in her brisk and confident strides, sometimes she stopped to grab a handful of the herbs she saw on the way and tucked them in her pocket for later use. They could be incorporated into a soup, or steeped into an aromatic tea. When Setareh came back to her tent an hour later, she saw that her daughter is coming back from the hills with her herd of young lambs. She needed to hurry to prepare bread for lunch. Soon Farshad was going to be back with the main herd. 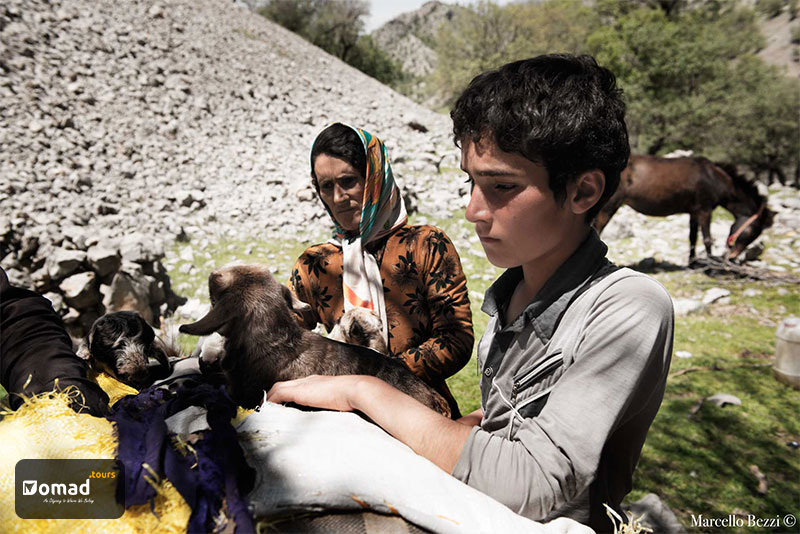 11 am: in a nomadic life
As expected, Farshad and the herd came back from their morning graze. Setareh rushed towards them, it was important to not let the mother sheep reunite with their babies right when they were back and full of fresh milk. Setareh set out lunch for her son, which consisted of freshly made flatbread and some yogurt, and watched as he devoured his lunch. Afterwards, she started boiling the milk and turning it to yogurt while her son rested for a little while under the shade of the tent.

In Tehran
Sara considered which restaurant she wanted to order her lunch from. With an internal sigh of relief, she cherished the fact that she could have so many options for lunch. She remembered that while she was on an assignment to get to know Iran’s nomadic culture, how hard it had been for her. To go days with only flatbread and yogurt as the main meal three times a day. She ordered a new sandwich that she hadn’t tried before and went to her meeting before lunch. 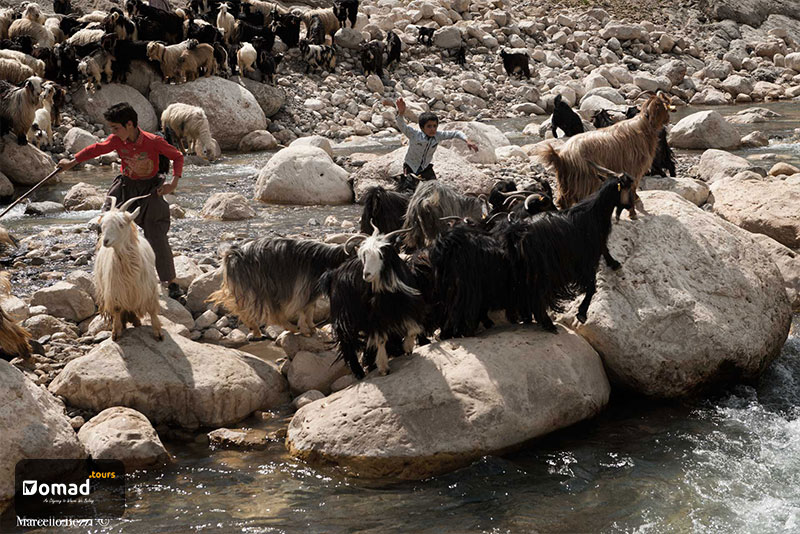 5 pm: in a nomadic life
Sara was happy and tired at the end of another full day of work. She felt satisfied and rewarded by her work and at the same time, she had that annoying headache that always came with relentless hours of working behind the laptop. As she sat up from her chair, she stretched her tight muscles and heard several of her joints pop after so much stiff sitting.
Setareh was boiling some water in a large pot so that her small children could take a bath. Her son had returned to the hills with the herd for their night-time grazing. When it was just her and her young daughters, her girls could take off their head-scarves and she could brush their hair and untangle their locks that were always messy after a full day of playing in the fields. When the water was hot and ready, she made a private corner by draping a large plastic sheet around some wooden sticks and started to help the children take a bath. She too wished she could be as care-free as her children in that moment, but given how other families and relatives had pitched their tents in nearby pastures and sometimes they walked by and said hello or stopped to have tea and chat, she couldn’t just take off her head-scarf and let her hair loose, let alone take a bath right now.

9 pm: in Tehran
Sara returned home and took a shower to wash off a full day’s grime that plastered to her face after walking in Tehran’s polluted air. She opened the fridge and saw a jar containing nomadic Kashk that she had brought home from her visit to the nomads. She made a mental note to cook something with it one of these days. But right now, she felt too tired to cook, so she opened a packet of frozen food and started to heat it in the microwave. She then chose a movie to watch and ate her dinner with it. She also checked her social media accounts that were buzzing with notifications. One of the things she really missed when she was on her nomadic assignment were these notifications. As annoying and time-consuming as they were sometimes, she felt tethered to this world by them, and being separated from this virtual world had made her restless.

9 pm: in a nomadic life
Setareh awaited the return of her husband and her son anytime now. In these quiet times of the day when the work of the day was done and her muscles ached a bit from all that walking and physical exertion, she felt content that another day’s chores were done. She only had this little bit of time to rest before she had to repeat her responsibilities in the morning. She suddenly thought of the woman that once came to visit them from the city. Setareh remembered how that woman used to take a book out and read, any time that she was free like this. Setareh wasn’t sure if she wanted to read as she did. On the one hand, the little stories that she told from her book were fascinating. But Setareh noticed how that woman wore glasses and wasn’t able to see the far space as she did, even with her glasses on. Setareh could see every person and animal on the mountains even when they were basically moving dots. Even if she wanted to read stories like her city-guest, it was impossible. Not only had she not gone to school, but there also wasn’t any room for quietly sitting and reading in her daily routine. Who would milk the sheep and make yogurt and butter and ghee, then? Who would raise the kids? She wondered if the city-woman who was the same age as her, had any kids to look after. Setareh thought to ask her if they would meet again.