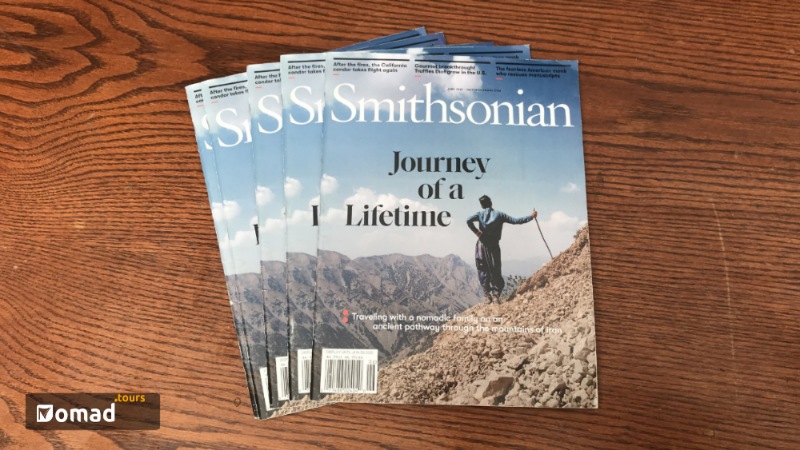 Our Kooch with the Bakhtiari Nomads now on the Smithsonian Cover

Bakhtiari Nomads’ Transhumance in Smithsonian
Our Kooch (nomdic transhumance) with Bakhtiari nomads in the fall of 2020, turned into a 10-page article and now, it’s published in one of the biggest U.S magazines: Smithsonian. Emily Garthwaite, the incredible award-winning photojournalist, accompanied IRANomad tours in a two-week journey through the Zagros mountains of Iran. Her amazing photos, taken during the challenging journey, and her wonderful memoirs of the kooch days were published in JUNE 2021 volume of the Smithsonian magazine which places a Smithsonian lens on the world, looking at the topics and subject matters researched, studied, and exhibited by the Smithsonian: science, history, art, popular culture, and innovation. Moreover, Emily’s great picture of a pastoralist nomad standing on a Zagros mountain cliff was chosen for the cover of the June volume of Smithsonian magazine. We couldn’t be any more proud at the moment that little by little, people of the world are getting to know more about Iran Nomads. That kooch was an incredibly exciting quest for us. The quest to show why nomadic lifestyle is so valuable and why this heritage should be cherished and preserved.

Smithsonian’s history started when Edward K. Thompson, the retired editor of Life magazine, was asked by S. Dillon Ripley, the then-Secretary of the Smithsonian, to create a magazine about things in which the Smithsonian is, might be or ought to be interested.
Thompson’s philosophy for the new magazine was that it should provoke curiosity in the already intellectually prepared minds. That it should deal with the past through its connection with the present. It should present the richest art and somehow touch the matters about the future as well through coverage of social progress, science, and technology. Technical subjects should be made easier to understand by good writers who would stimulate the readers to improve their knowledge without boring them with unnecessary jargon. Thompson declared the requirement for the best writers and the best photographers for the magazine’s success. And we’re proud to say that Emily Garthwaite, one of our photojournalist travelers, was professional enough in her work to earn this creditable magazine’s admiration and have some of her photos & notes from her trip to Iran, published in Smithsonian magazine. 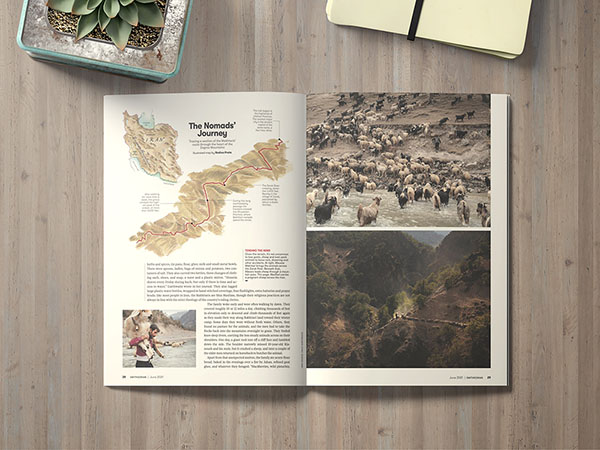 Deep gorges and jagged peaks surpassing 14,000 feet buffered ancient empires from one another—Babylon in the Fertile Crescent and, to the east, the great metropolises of ancient Persia. They have frustrated more than one invader, including Alexander the Great. But this forbidding mountain range is also rich in grasslands and rivers fed by winter snows, and for thousands of years, tribal groups have migrated through Zagros with the seasonal changes to pasture their goats and sheep. That grueling, often dangerous feature of nomadic life has evolved, but it has not entirely disappeared. It persists to this day not only for practical reasons but also as a meaningful ritual for people whose history is rooted in the mountains.

Emily is interested in slow traveling and storytelling through focussing on community-based stories rather than telling general stories about countries (which is practically impossible to do especially in multifaceted countries like Iran.
She was hosted by the hospitable Mokhtari family, members of the Bakhtiari tribe, Charbouri sub-tribe, who were setting out from their summer pastures on Zagros mountains in Iran’s Isfahan Province. The family included the parents: Hossein and Jahan, with three of their nine children, and several cousins and other relatives. Crossing the rugged paths through the Zagros mountains, they traveled with about five horses, ten donkeys and mules, and hundreds of goats and sheep. Their destination was Khuzestan Province, some 150 difficult miles away. The challenging journey, known in Farsi and in the local Luri dialect as “kooch“, took two weeks and a lot of memories were shaped during this short time which Emily recollected later in a webinar we held together. During the course of our webinar, Emily expressed her opinion about these nomads, the guardians of Zagros, in the following words:

But for many families, the migration itself remains a vital expression of their identity. “Most nomads and former nomads in Iran are deeply attached to their traditional territories,” says Lois Beck, an anthropologist at Washington University in St. Louis and an expert on Iran’s nomadic tribes. “Each of these groups has an intense sense of solidarity, and they are aware that they are a minority in Iran, and are often marginalised and repressed. And so they’re interested in keeping who they are and passing what they are to the next generation, and the seasonal migration is part of that. If you asked a Bakhtiari at random, what’s the most important thing about his culture? He would probably say: ‘Migration.

Occasionally, the group passed through a Bakhtiari village, where they were greeted on ceremonial rugs laid beneath a giant oak tree and served tea with sugar. Because families walking kooch graze their livestock on land belonging to the villages they pass through, they frequently offer to exchange an animal with their hosts as a symbol of their gratitude, for example a young goat for another of the same age and size. In one village, the Mokhtaris’ hosts instead suggested trading a mature ram for Hossein’s white horse—a beloved companion to Kianoush, Hosein’s young son, who stood clinging to the animal, wiping away tears, while his father negotiated the exchange